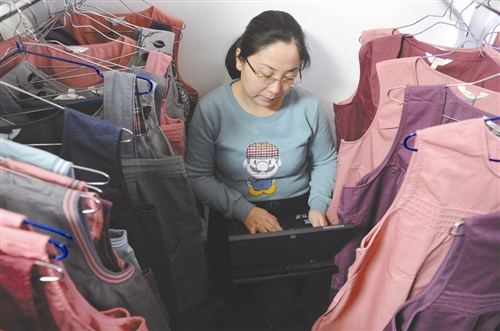 At the beginning of the Year of the Dragon, the anti-radiation clothing industry in Dongguan experienced a chilly chill.

At the end of 2011, CCTV reported that radiation protection suits not only prevented radiation, but also gathered radiation.

Yesterday, when the reporter visited Dongguan radiation protection clothing enterprises, they learned that although there are not many Dongguan-based enterprises that use radiation-protective clothing as their main business, most companies have already experienced the negative impact of this incident and have caused the production and sales of enterprises to decline. Up to 50%.

In the face of a bitter winter, some companies have begun to seek breakthroughs and enhance their ability to resist risks by enriching their product lines. On the other hand, people in the industry believe that it is necessary to completely eliminate the doubts of the outside world and introduce the national standards for the radiation protection apparel industry as soon as possible.

Radiation protective clothing market shrinks. Dongguan City, Garment Co., Ltd. is a charm of production and sales of anti-electromagnetic radiation-based apparel industry, set Branch, workers, trade in one of the garment enterprises. The reporter learned from the companyâ€™s website that â€œEnchanted Healthâ€ is an independent brand owned by the company. The products include anti-electromagnetic radiation maternity clothes, anti-static radiation protection work clothes, etc., and are sold to various provinces and cities across the country and Hong Kong and Macau. The main production model is outsourcing.

The companyâ€™s sales manager Lan Xing revealed that after the CCTV report incident occurred last year, the companyâ€™s product sales were severely hampered and its sales volume declined significantly. "This incident has a huge impact on the industry, with sales falling by nearly 50%," said Lan. However, she declined to disclose specific business data.

Another person in charge of an apparel production company that did not wish to be named stated that although radiation protection clothing is not the company's main business, at present, enterprises have basically stopped the production of radiation-protected clothing and turned to ordinary clothing production. "There is no demand in the market and there will naturally be no orders," he said.

It is understood that after the release of CCTV's report at the end of last year, *** also claimed that radiation protection suits were commercial ** with Chinese characteristics. Although the Shanghai Institute of Electromagnetic Emitting Radiation (E-EMF) has made rumors afterwards, it is still difficult to offset the influence of its â€œcelebrity effectâ€.

Not only is it a Dongguan company, the well-known October Mommy, Tim Xiang and other brands in the industry also said that after CCTV reports, product network sales have been greatly affected.

In this regard, industry analysts believe that radiation protection clothing as an industry that has emerged in the past five years has quickly gained consumer acceptance because it caters to the concept of healthy pursuit in the pregnant and infant market. As an industry sector that â€œcreates demand,â€ when the industry becomes troubled, the market will respond quickly, and the emerging industryâ€™s ability to withstand risks is relatively weak.

The radiation protection service was mostly for service enterprises. After the Spring Festival, Lanzhou was very busy. The preparation for expanding the product range was her first job this year, and ordinary maternity clothes and baby clothes were the main targets for this year. direction. "The purpose of enriching the product category is to enhance the ability to resist risks." Ran ** said bluntly, in this year's maternity dress and baby clothing products business, charm and health will not stick to its own brand marketing, do not rule out other mature brand agents possibility. "At the same time as enriching the product line, it will not give up the main business of radiation protection clothing," she said.

During the visit, the reporter found that clothing companies that use radiation-based clothing as their auxiliary business will be more flexible in the turning point of the market. Some clothing companies have stated that radiation protection clothing is only a small part of the business, and the proportion is even less than 30%, so even if the suspension of production temporarily has no major impact.

In the industry, the October Mommy brand leader who ranked first in the sales volume of pregnant and infant industry also said in an interview with the media that Mommyâ€™s product line is relatively full in October, and radiation protection products are only part of it, so the overall impact is relatively small. .

According to Pan Rihui, secretary-general of the Municipal Textile and Apparel Industry Association, there is indeed no specific norm in the radiation protection apparel industry and there is a lack of uniform standards. According to reports, at present, there are fewer companies in Dongguan to prevent radiation clothing from doing business. It is also for this reason that Dongguan-related companies lack the right to speak in the industry, and production companies often use different standards, and the basis for explaining to consumers in the publicity process is not uniform.

Garment Co., Ltd., the person in charge of Charm Health Clothing Co., Ltd., also stated that the introduction of a unified national standard can promote the healthy development of the industry and it is also a good thing for companies.

Another person in charge of the industry believes that the introduction of national standards will set a benchmark, on the one hand, it will enable consumers to have a specific reference when purchasing, eliminating doubts on the radiation protection apparel industry; on the other hand, they can eliminate some non-conformities. Standard companies make the development of the entire industry more healthy and orderly.

According to the reporterâ€™s access to relevant data, China only introduced a â€œMicrowave Screen Protective Clothingâ€ recommended standard in December 2009, but there is no mandatory national standard for the entire radiation protection product.

Alloy Slider is standard high quality  product, applicable to all standard zipper products, 4 different types of slider shapes, many models:3#, 4#, 5#, 7#, 8#, 10#, 12# and so on, more than 10 specifications, It is widely used in clothing, handbag, shoe, leather and other products, To provide custom  slider. It's good feeling when sliding on the Brass Zipper, aluminum zipper, and other Metal Zipper.